Recent data from the IMF supports the view that China and Africa are becoming increasingly entwined as trading partners as China exploits the vast mineral and material wealth of the African continent in return for Capital Investment, machinery and technological know how.

The massive growth and change in China’s economy over the last decade have seen it increase in global power to the point where it begins to overshadow the U.S.A and Europe. 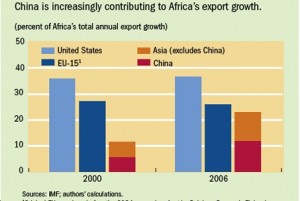 Whilst the U.S and Europe have been mired in recession the Chinese rescue package has ensured that growth in that country continues at a rate of around 10%.

This growth can only be sustained by the continued supply of mineral wealth and mined resources, hence the involvement in Africa.

So, should those of us in the Western democracies be concerned about China’s increasing involvement in this vast continent ?

As China has expanded and exported it’s own particular brand of State Capitalism it shows no signs whatsoever of either promoting or developing democracy.

If Democracy, free speech, tolerance and egalitariasm are to be encouraged as Africa develops as a continent perhaps the U.S.A and Europe need to be more proactive in developing and sustaining their economic development programs in Africa to ensure, by the end of the decade, we aren’t looking at the United States of ChinAfrica.