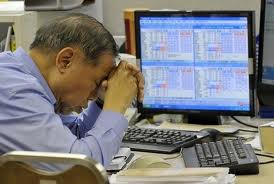 We have seen trillions wiped off stock markets worldwide, the FTSE 100 has lost over 10% of it’s value in the last week alone & our TV screens have been filled with hysterical traders and concerned politicians.

So does it really matter, in the long term probably not, but if you were planning on retiring soon and have an equities based pension scheme you may well have to think about postponing your retirement.

The markets have become the biggest casino on the planet, where billions are traded on market fluctuations to generate financial gain for wealthy funds. The problem is that massive losses can also be generated especially in times (like now) of great volatility.

It is almost as if Government policies are primarily based on satisfying short term targets of financial speculators.

Over the last 30 years we have seen increasing numbers of large corporations listed on the Stock Market. The benefits of this are increased transparency and greater share ownership but the downside is that company boards are increasingly focused on short term share performance rather than long term strategic growth. They are also more vulnerable to deselection which increases their focus on knee jerk reaction to stock market fluctuations.

So how do we escape from all this madness ?

Here are a few suggestions which may help:-

1) Corporations should seriously consider de-listing from publicly listed stock exchanges & revert to private Limited Company status. Directors will then be able to take a more objective long term view divorced from the daily vagaries of the markets.

2) They should follow the example of German organizations and involve workers representatives at board level, increasing participation and integration.

3) The only way to pay down debt is to generate growth; Governments need to think beyond printing money and subsidizing banks. Innovation in manufacturing and services should be strongly encouraged.

4) Failing corporations, whether banks or otherwise, must be allowed to fall. The risks of failing institutions should not be born by the taxpayer.

5) A state bank should be established to act in direct competition with the private sector so that essential Capital flows can be maintained.

6) Government (NOT essential public services) must be streamlined and taxes reduced. For too long those in business & manufacturing have subsidised those working for the state who provide no added value whatsoever.

We need a radical rethink if we want to escape the madness of Casino Capitalism.