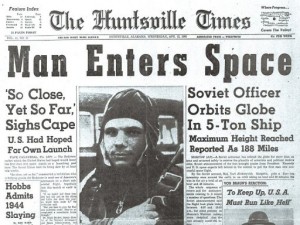 5o years ago today Yuri Gagarin became the first man in space when he orbited the earth in his Vostok spacecraft, winning the cold war race and catapulting himself into the annals of history.

Consider for a few moments what we have achieved since then.

We have taken “one small step for a man, giant leap for mankind” when Neil Armstrong became the first man to walk on the moon in 1969.

Like Icarus we have sailed too close to the sun in Apollo 13 and survived through tremendous ingenuity and fortitude.

Through Hubble we have peered back through Space & Time to the very origins of the Universe.